Do you remember your fascination with globes as a child? They were such a coveted treasure. The sheer delight of exploring one! The big blue thing that was fun to simply spin around at times, or to stop and learn the name of at least one new place we never knew of. The number of afternoons well-spent discovering new places, The status they earned you among friends, it was such a flex, right? Well, PlayShifu Orboot does all of that, but better!

What are the Orboot Globes, you ask?

A range of our most loved products worldwide, via which we started our journey of educating through the power of play across the world!

Orboot is a range of three different AR-powered globes that connects to your digital devices so that your children can expand their knowledge and quench their curiosity about the world they live in, the dinosaur era of the past and a world, namely Mars, away from their own. A 10-inch powerhouse of an interactive globe for kids which when paired with the Orboot free app lets them explore: 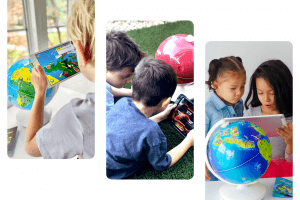 With three interactive globes that promise magical learning experiences through virtual globetrotting, PlayShifu Orboot is unique because it makes the globe come alive through Augmented Reality. Each of the Orboot globes is developed with an intention of enabling kids to interact, visualize and learn. Each globe is unique and engaging with AR modes that help kids visualize monuments and their facts, dinosaurs and their habitat, and the many missions on Mars. They open up a whole new interaction with learning.

With PlayShifu Orboot, your kid will discover an out-of-the-world experience. They’ll explore a world with a globe that does not show them the political and physical boundaries, discover Space and the universe outside of planet Earth, and relive the pre-historical era of dinosaurs. Meanwhile, the wholesome and multi-sensory participation will make their imagination, knowledge, and vision limitless. The possibilities with any and every Orboot globe are endless and will help your child gather and retain knowledge that will help them in their early years as well as in their lives ahead.

Let’s start our discovery with Orboot Earth and why has it set the world talking!

An award-winning, no-borders, interactive AR world globe, Orboot Earth is a revolving powerhouse of information and knowledge about this planet we call our home! You get to learn about the world in a united setting without the noise of borders or names on the globe but through highlights to identify the places with. Combined with the Orboot Earth app, it helps your child discover the magical power of this fantastic world via storytelling, fun facts, interactive games, quizzes, and more! 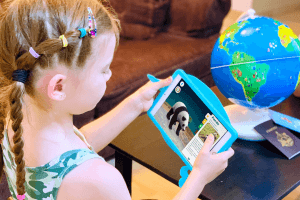 Orboot Earth merges the physical object (the globe) with the virtual one (the app) through Augmented Reality. It makes places, animals, monuments, and natural wonders of the world come alive. It enables children’s interactions with elephants as they trumpet and with lions as they roar. It teaches them about the food chain and ecosystems. It lets kids explore cultures, learn about festivals, and get familiar with the cuisines of the world. With multiple modes like tours, quizzes, and interactive globe games, kids can learn everything they are curious about this amazing Earth through virtual globetrotting.

A favorite with parents and a much-loved educational tool by teachers in classrooms, Orboot Earth has even left major publications intrigued.

“Having a real globe is a great idea, and turns it into a hands-on activity rather than yet another swipe-fest.”—Devin Coldewey, tech author, on how hands-on play with Orboot is better than apps that show a globe on the screen. 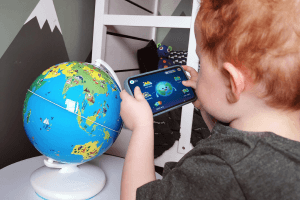 Let’s see how our interactive globe for kids has gotten the parents buzzing!

“I LOVE OUR ORBOOT! The elementary students had a blast and were super intrigued by their explorations. Thanks for what you do! I’m a fan. And promoter! Best of luck as you continue to grow your company.”

“This is a great item. Spent most of Sunday with my 2-year-old nephew feeding the different animals in the app. He loved it. Everyone I’ve shown it to thinks it’s brilliant. Thank you for your time and effort.”

Let us now discover Orboot Mars, the globe that’s bringing much delight to our little space explorers out there!

Starting from “Twinkle Twinkle Little Star” to devouring every bit of information about stars, planets, galaxies, and the universe, the dreams of your little astronauts build in infancy itself.

The love for space in the minds of your young adventurers is a constant! With so many recent excursions into the big, vast galaxy, the many new discoveries, and a new understanding of the mechanics of the universe, the buzz into the world of space is sure to foster the curiosities of young minds.

So, we must cater to their spirit of inquiry into the space, right?

We made it our mission to build an interactive globe for kids to explore the planet Mars and Orboot Mars was born! 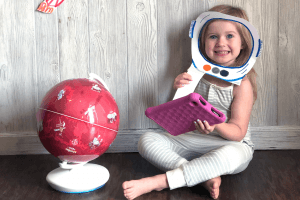 Orboot Mars is the first-ever interactive Mars globe. It is the first time that augmented reality and data from rover missions has been utilized to create a toy about the planet. A visualization marvel that lets you scan the globe with its free app to explore the many Mars missions and spacecraft. A doorway to 1000+ facts and information about 20+ spacecraft, this PlayShifu Orboot globe lets you explore all the discoveries made about the Red Planet from the multitude of missions sent there. Not just the planet, your kids also learn in detail about the missions.

A groundbreaking STEM toy that encourages scientific thinking and space exploration, Orboot Mars doesn’t end with a virtual globetrotting session. There are games and puzzles with fun stories and activities that encourage learners to discover much about the many Mars missions, for example–

Let’s hear what our patrons say about this out-of-this-world toy with quizzes, Mars globe games, and much more.

“Kami is obsessed with space so when she saw Orboot Mars, she went crazy!”

“Riv may end up changing her future occupation to an astronaut!” 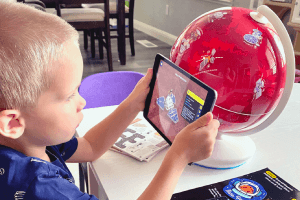 Time to put on space exploration boots for your kids and send them on a Martian adventure they’ll delight in and build exceptional skills like scientific thinking and general knowledge from, won’t you say?

Now let’s talk about the roarsome product that we are mighty proud of Orboot Dinos! The one must-have toy that teaches our young learners about the mighty dinosaurs of the pre-historic era through games and quizzes!

With Orboot Dinos, we aimed to build an interactive globe for kids that boosts their intelligence! After all, the brain benefits of a child’s fascination with dinosaurs are much researched and discussed!

So, we decided to build a PlayShifu Orboot globe that will not only answer the dinosaur-related questions your kids are curious about but also spark their interest and curiosity about the pre-historic era of dinosaurs! An Orboot globe that will let them explore and discover a time mired in history, sciences, mystery, and much more.

With Orboot Dinos, your children can take the first steps towards learning about archaeology and paleontology, and time travel to prehistoric times. They interact with dinosaurs in live, 3D formats, explore more than 500 facts about these awe-inspiring creatures and the times that they inhabited, and learn about 50+ dinosaurs through 4 incredible modes of play and quizzes. 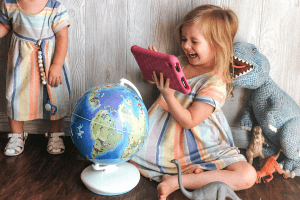 In short, here’s what the kids will specifically learn about the dinosaurs in an interactive and memorable way, so as to retain this information:

All of this and much more!

A first-ever AR globe to travel back to prehistoric lands, Orboot Dinos lets your little dino-loving kids explore the lost world of the Triassic, Jurassic world & Cretaceous periods. The power of Augmented Reality lets you scan the globe with the app to bring alive realistic-looking dinosaurs with voices of dinosaurs to help you explore the Mesozoic era in all its glory!

Here’s what parents from across the world are saying…

“My son is obsessed with dinosaurs! I found this product online and it turned out to be amazing!”

“My son (who loses interest in things fast) loves this globe! He can identify dinosaurs and loves learning about them.”

You’d think that all the virtual globetrotting and the thrilling adventures into the land of prehistoric times, the present Earth, and the futuristic Mars explorations are what PlayShifu Orboot offers and has set the town abuzz with! But, it gets better and better.

At PlayShifu, we always wonder how to enhance your child’s learning experience. Our team of developers and fact-finding experts work to bring the best experience to the Orboot range, with regular updates being rolled out to ensure that children are in touch with the latest and most accurate information. Our focus remains on every product being STEAM-focused and developing multiple skills. And all of the Orboot globes are a testament to these efforts. Providing facts and information isn’t our sole aim with these interactive globes for kids. Our aim is to do so in a fun way that leads to much more learning, retaining, and excitement to discover more!

Each Orboot globe is full of storytelling, puzzles, quizzes, delightful voiceovers, and games that make exploration and discovery thousand times more enjoyable. The Orboot app gives a real-time response and instant feedback that helps children learn what they want to, instead of the order of learning being predetermined. The globe games ensure that the young children are also building scientific thinking, logical reasoning, persistence, physics fundamentals, and cultural sensitivities.

It inspires children as young as 4 to build tenacity and stay curious. It helps your kid as old as 10 years to keep the wonder of science alive and helps them appreciate the planet where they live, the times our Earth has seen and developed from, and the vastness and fantasy of space.

Is it any wonder that everyone is talking about our new-age wonder toy, PlayShifu Orboot! Time to join the wonderful PlayShifu family, right? Order your Orboot globe today and let the adventures begin…