Fun games on family game nights! Don’t we all look forward to them? Laid back evenings, some healthy no-mess snacks (here are some ideas), and quality time with the kids that doesn’t feel like monitoring! Of course, they’re a LOT of fun. Besides that, however, are there other benefits to this tradition?

The short answer is YES. PLENTY of them!

A good starting point would be the recent emphasis on executive function (EF). Much has been written about its role in successful learning. But, what does it actually mean? Executive function refers to a set of skills that include working memory, flexible thinking, and self control.

Perhaps an easier way to explain it would be as ‘the management system of the brain’. Basically, these skills allow us to learn, work, and manage daily life. They allow us to set goals, plan, and get things done.

Without executive function, it becomes harder for a child to follow instructions, focus their attention, prioritize tasks, or retain information that’s necessary. Okay, you’re probably thinking “…this is interesting, but where do game nights come in?” 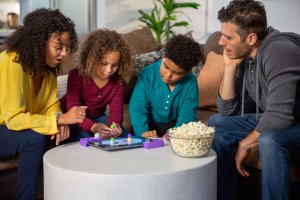 Children’s lives, especially between the ages of 6-12, are largely regulated and defined by adults. This means they have reduced opportunities for self-directed executive function. Their activities–whether it’s sport or academic learning–are largely structured and directed by adults. This is where family game nights change it up! They are collaborative. Adults are involved, but as peers. It’s like playing with friends, but with the emotional benefits of parent-child time!

To understand more about how family game nights benefit executive function, shall we look at a typical board game like Snakes and Ladders? It’s been around forever, right? And, when thinking of family game night games, it’s quite the staple!

“Mr. Javier lives at 22/4, North Road, Crescent Apartments. To get there, you have to turn left from the overpass and take the second right. It’s the third building to your left”

There’s two sets of information in there. The first is Mr. Javier’s address and the second, a set of instructions on how to get there. Your brain cannot process both at the same time, so it holds the address in mind, while focussing on the instructions to get there. THIS ability is called working memory.

A board game like Snakes and Ladders employs this regularly. I threw 5, now I have to move 5 places and then decide what action to perform based on where I’ve fallen. Look at the all things I’ve done: 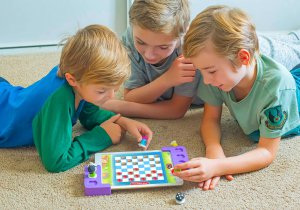 While it might not seem like much at first, playing Snakes and Ladders actually benefits working memory a whole lot, and adds plenty of laughs along the way up (or, if you’re unlucky like me, down at the last moment)!

Speaking of ups and downs, directionality is another underrated benefit of the game. The winding nature of the board can be confusing for younger kids aged 3-5 years. It’s a fun-filled lesson in visual orientation!

Wanna mix it up a bit? Sprinkle a teeny bit of DIY over your family game night ideas. Add your own ‘good’ and ‘bad’ actions before moving up or down. For example, before moving up a ladder, mention a good deed you’d like to do, “I’d like to help mama with watering the plants” or in the case of bad, “It’s not good to…make fun of someone for their weight”. Over time, this can become an additional way to discuss moral ideas. The same ‘intervention’ can be applied to any board game, not just Snakes and Ladders. Family game night ideas can go beyond the games themselves!

Now, let’s take flexible learning, another core skill of executive function. Isn’t that what typical games from family game nights are all about? Adapting as you go along!

Let’s take Ludo, as an example. If you’re just a good throw away from getting safely ahead of the other team, it’s likely you’re excited. However, things can go the other way. Here, you end up recalculating your chances. This may be expressed as “ooohhh…don’t worry…we still have a chance. Just need 2 to land on the same square.” But it’s still flexible thinking and emotional control being put to work.

A better example of using flexible thinking would be Tic Tac Toe or ‘knots and crosses’ (as I grew up calling it). Each time your opponent makes a move, you have to adapt your strategy or think ahead of various possibilities.

There’s plenty of research about how board games work on these crucial pillars of executive function. But, family game nights are so much more than another sneaky opportunity to build skills, right? 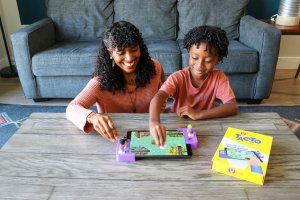 “Daddyyy…play with me!” When some version of that escapes your child’s lips, it’s a call for emotional involvement. Family game nights provide a wonderful opportunity for this, in a way that doesn’t feel forced. This helps your child build self-esteem and feel emotionally satisfied. In turn, those lead to superior performances in school and extracurriculars, and less behavioral ‘problems’.

It might seem redundant to say this, but children really NEED this type of time for emotional bonding. This is what they carry with them for life. It cultivates empathy with which they view and engage with their surroundings.

While the popular image of game nights or family game nights apps is rather ‘happy’, don’t underestimate their therapeutic utility.

If your child is going through something they want to talk about–a friend being mean, bullying or some form of self doubt, or even getting over the loss of a pet–the heaviness of the subject itself can be a deterrent. So, a “come…let’s talk” type approach where the sole function of the time spent IS to talk about something difficult may backfire. Instead, family game nights offer a nice time to bond and open up topics with a bit of light-heartedness. In that sense, they create a ‘safe’ space.

There’s a difference between sitting in bed with your child and asking, “So…what did Megan say?” and being mid-way through a game and going “aaahh…can’t believe I missed! Okay, your turn. Oh, by the way, what did Megan say?” Of course, this varies based on the child’s personality, age, and complexity of issue, but is still a suggestion worth bearing in mind. 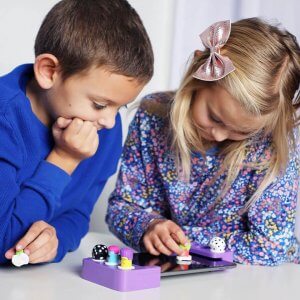 In all, family game nights come with a plethora of benefits. They enable children to become organized, more flexible, and strategic thinkers. This carries over into professional and personal aspects of their lives. In a time where working parents have increasingly less time to spend with their kids, game nights provide a quality window that both can look forward to as a stress buster (and modern life needs PLENTY of stress busting). The emotional bonding facilitated is extremely valuable for long-term mental health.

Oh, did we forget? It’s also a lifelong opportunity for your kid(s) to remind you of ALL the times they won! Believe me, there will be a LOT!