‘What if we could learn more about the world than just its boundaries?’

That question makes me think of how I discuss the world with my child. Do I talk about where a certain country ends and another one begins? Sometimes. But more often, it’s from a perspective of fascination about what Earth as a collective unit offers. We talk about culinary flavors we’ve never tried–my love for fermented food, and his equivalent resistance. We ogle over the near-mythical creatures of the deep sea. We talk about plastic and its use in the world, how industries grew, and the changing climate.

Could a toy represent this experience? Where learning and fascination for knowledge needn’t stop at one thing. In turn, that makes me think about how I learned about the world. I learned about it in separated chunks: National Geographic for wildlife, trivia books for monuments, Oxford Children’s Encyclopedia for culture and landscapes, and the old-fashioned globe for countries and continents.

I listened to Harry Belafonte, who was of Jamaican ancestry. My favorite animal was the tiger. I learned about Robert ‘The Giant of Illinois’ Wadlow as being the tallest man ever. I learned about the two-toed Vadoma tribe of Zimbabwe from a documentary called ‘Touch The Sky’. But, I hardly felt like each of these connected when I was spinning any kind of globe, or looking in. There were just names; fascinating ones, but still just that. It almost felt like ‘another’ topic. Should it have? I was, after all, using this object to make sense of my place in the world. The same one where all my other fascinations existed.

The ‘vocation’ of technology is to join these dots and create more wholesome experiences. Whether this involves understanding the trails between our daily habits and climate change, or the way various cultures are interlinked. In learning, technology helps avoid the question “…but, where will I ever use this?” That was a sentiment that punctuated the learning experiences of many from my generation. We knew countries, capitals, language names, flags, national animals, symbols, and whatnot. We knew a lot! But we knew little about WHY we’re learning this, apart from the fact that it’s ‘knowledge’ and ‘part of the syllabus’. 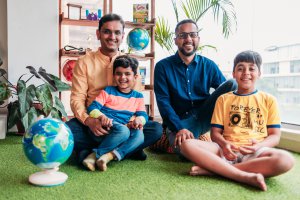 PlayShifu was born in a climate where the need for these ‘links’ increased; at home, in schools, in professional environments, and society at large. Its first major attempt at making these links was Orboot.

The first Orboot globe I owned was Orboot Dinos. My son and I already knew lots of dinosaur names; we often looked at illustrations and pictures of reconstructed skeletons. From time to time, we’d even chat about which dinosaurs roamed through our favorite places in India. But, and this is a dino-sized BUT…we could never do all of this at the same time, through one single object.

THIS is what Orboot Dinos did. This interactive globe for kids linked all the things we’re enthusiastic about under one unified platform–that of our Earth. It’s how knowledge fed wonder. In one sitting, we could pick our favorite dinosaur, hear its call and see how it walked, try to imitate both, laugh at each other’s efforts, and then think about how cool it would be to come across a fossil. The vision for a smart globe was exactly this sort of wholesome enjoyment, where learning and relevance don’t sit separately from playfulness. Gen Alpha needed it that way.

The Birth of Orboot

Orboot was born from Vivek Goyal’s personal experience with Dhruv, his son. Whenever he tried reading to Dhruv, he’d simply doze off. This came as a somewhat rude shock to Vivek, who expected the same sparkle of interest he had as a child. Was this it? Was storytelling itself simply boring? 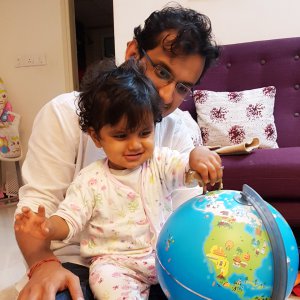 For him, it was a moment of panic. Because something tried and tested for generations failed to work on his child. Did that mean that knowledge and learning would never interest Dhruv? As a parent, I can relate. We bank upon things that ‘worked’ for us, without understanding how it won’t for our children. Let me give you a simpler example:

A couple of years ago, for Christmas, we decided to watch the holiday classic ‘Home Alone’ together as a family. My partner and I had been telling him about this ‘must-watch’ from our childhood. We started the movie, and very quickly his interest started fading. After the hype of the first 10 mins fizzled, he had a puzzled look on his face. About 45 mins in, he said “I don’t understand what’s funny…”

Kevin taking on the wet bandits, Harry and Marv, with all those DIY tricks? The scared Pizza delivery guy? “Keep the change you filthy animal!” Wait! This wasn’t funny?

Apparently not to him. He just couldn’t fathom why it was so much fun to keep laughing at another’s misery. That ended the show for the night and made us think a lot about changing values. If tastes in movies and music can change, why not methods of learning?

This realization came upon Vivek when Dhruv was gawking at an Apple product. “What if I could make my child love toys that taught?”

“Is there any possibility of making him sharp while gawking at a screen?”

Dhruv, and millions in his generation, couldn’t (always) be engaged with methods of the past. Tech helped Vivek look ahead, instead of mull over the ‘good ol’ days’. That was a necessary point of acceptance for the innovation to begin. What came first were scannable flash cards: learning tools that lit up in animated 3D visuals at the tap of a screen. But, the ambition was bigger. Something more adaptable and multi-sensory. Vivek wanted to take something considered a standard and give it a refresh. 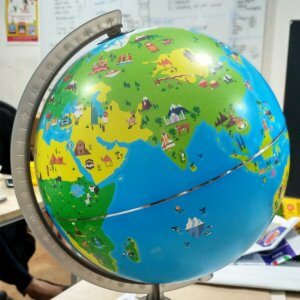 In 1930, American school supplies manufacturer Luther I. Replogle, a one-time school supply salesman, saw the need for a globe in every home. For most of the 20th century, the Replogle globe was the best globe the world knew. Sure, borders and countries changed, but it was still the template. By 2016, however, the way people lived and consumed information had dramatically changed.

News was real-time, there was a near-endless supply of media, and almost anything could be searched for and accessed at a much higher speed. The average person knew more, even about places that were ‘far removed’. If they didn’t, they could bring themselves up to speed rather quickly. The perception of a place was more than just its ‘borders’.

Vivek wanted to give the globe an update that reflected this change. He wanted to create something that could become a part of every child’s foundational understanding of cultural diversity, history, cuisine, wildlife, architecture and much more. Basically, something that children could interact with as they learnt more about the world than just its boundaries.

This was Orboot Earth–an interactive globe for kids.

Using the incredible interactive potential of AR (Augmented Reality), a core team of engineers, toy designers, storytellers and researchers brought Orboot Earth to life. For Vivek, however, the real litmus test was Dhruv. If Orboot Earth could capture his interest, then there was some merit to his idea. Else, he’d have hit the drawing board again to create the kind of globe Dhruv could relate to.

When he placed the prototype on Dhruv’s desk, he waited for exactly one minute before he started exploring his brand-new toy globe. After a lot of insightful trials and failures, there was no worry of hitting snooze. The sparkle was alive and well! 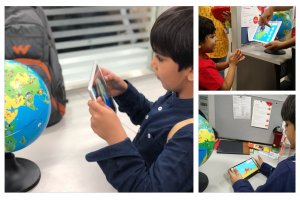 Dhruv had found something he could play with and learn from. Vivek had found a template to build the skills 21st-century kids needed, in a way they’d like. Mathematics, language learning, natural history, healthcare awareness, space science, what have you…plenty more learning was going to come alive.

The kids only have to hit ‘play’

Tech expands possibilities and realities. By virtue of that, it changes the ways in which we live, learn, apply and innovate. Realizing the immense possibilities of AR-driven play, and motivated by the ‘success’ of Orboot Earth, Vivek and his team surged ahead, to create experiences similar to their augmented reality globe.

What came next was a line of toys that ‘truly’ solidified Vivek’s conviction. Anxiety around device usage was at an all-time high among parents. However, unlike many other aspects of child-rearing, this one had no blueprint. Nobody could think back to the time they were addicted to using a touchscreen or how their parents dealt with it. Yet, parents would prefer if their kids could stay off screens, or at least if their usage was productive. So, digital possibilities without the dependency?

This is what gave rise to Plugo, a phygital (physical + digital) line of toys. The core idea was to have real-world (physical) play drive gameplay on a device (digital). This meant kids never actually come in contact with a screen! With this, just about any subject could be explored– mathematics, language learning, spatial reasoning and engineering, and much more. Plugo became that defining ‘second album’ that truly anchored the PlayShifu dream. The ‘Bends’ to Orboot’s ‘Pablo Honey’, the ‘With The Beatles’ to ‘Please Please Me’, ‘It Takes a Nation of Millions to Hold Us Back’ to ‘Yo! Bum Rush the Show!’, ‘Led Zeppelin II’ to ‘Led Zeppelin’, the ‘Nevermind’ to ‘Bleach’. 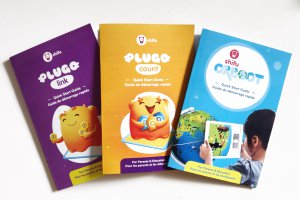 I’m not even the biggest grunge fan, but well…you get the point. Once Vivek and his team found their step with Plugo, it was evident that they were solving a very real problem. But was it just parents who faced this? Or, could educators do with an added perspective? And so, the PlayShifu purpose broadened to offer a hand to early childhood educators.

It genuinely warms my heart to know that once-rigid systems that were conditioned to separate learning from play were now harnessing its power. Let’s hope it leads us all to a more connected way of living.